Hiking through Altitude Sickness in The Enchantments

The Enchantments are one most well known, beautiful and difficult hikes in Washington. If you don’t get a permit and you want to experience The Enchantments then doing the through hike is your best option. It’s 18 miles with 4500 feet of elevation gain and your high point is 7800 feet with one especially hard part, Aasgard Pass, where you gain 1900 feet in less than a mile. When I decided to do the hike I felt great about being physically ready for it, but I had no idea that altitude would effect as much as it did, making the hike much more dangerous than I could have ever imagined.

I went with my buddy Eric who is a very experienced hiker/mountaineer. We decided to give ourselves 12 hours get through the hike, in terms of daylight, but openly said maybe it would actually take more like 9 or 10 hours. We packed light and got started on the trial head at 7:10am. After cruising up to Colchuck Lake and I got my first look at Aasgard Pass. 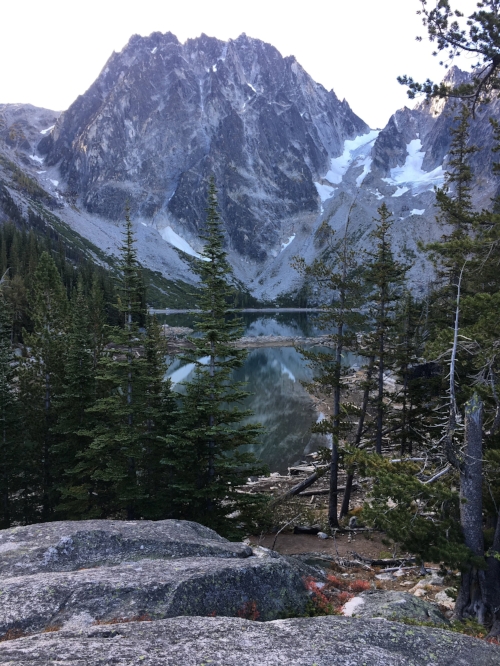 Aasgard Pass is brutal. It starts out fairly steep and gets steeper as you go. About 2/3 the way up, my head started hurting really bad. I had a pounding headache. At first I thought I was just tired and maybe a little dehydrated. So we stopped and eat some food and drank some water. The got better and we keep moving. Almost immediately, it came back. So we stopped a little further up and I filled some water from the stream and tired to what I thought was rehydrating. After getting a little further up, the headache came back. I keep thinking to myself, we aren’t even going that hight today, if I can’t do this, I won’t ever be able to do Rainer. Eventually, I made to the high point, 7800 feet. 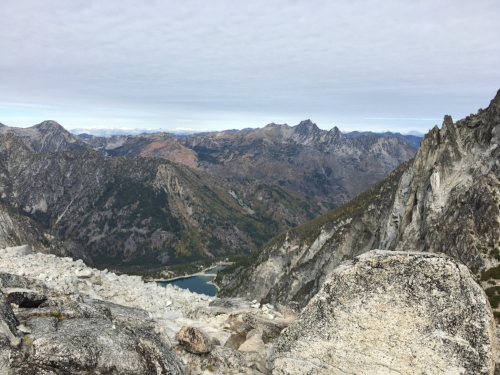 Once we stopped, I felt great again. Other than being tired, I hadn’t mentioned to Eric that my head was hurting. Our original plan was to run down the 12ish miles to finish the hike. So we started running and my headache came back. I made it a couple of hundred feet and I had to tell Eric I need to stop and that I had a headache. This was unlike me, I shouldn’t be completely exhausted at the point and this was what perked Eric’s attention to my condition. He started asking me a bunch a questions as we continued to walk along the trial. We went over how much water and food I had, he started telling me about the different stages of altitude sickness and sun exposure. Stage 1 being a headache, stage 2 being dizziness and balance issues. Stage 3, the most dangerous, you start getting delirious. We determined that I was in the beginning stages of altitude sickness and he told to keep communicated how I was feeling. I had no idea how dangerous not saying anything could be.

The rest of was rough for me. We would stop, eat, rehydrate and I would feel fine, but once we starting moving again, it would come right back. As we descended down the mountain, I keep thinking, “at that next lake down there, I will feel better,” but each time we dropped down in elevation, my condition did not improve. My pace started getting slower and slower. Groups we had passed on the way up were starting to pass us. We eventually made our way down to Snow Lake. I stilled didn’t feel any better, but I was determined to keep going because we really didn’t have any other choice. We weren’t prepared to camp there, but we did have head lamps. Then we dropped down to Nada Lake and suddenly I felt pretty good. 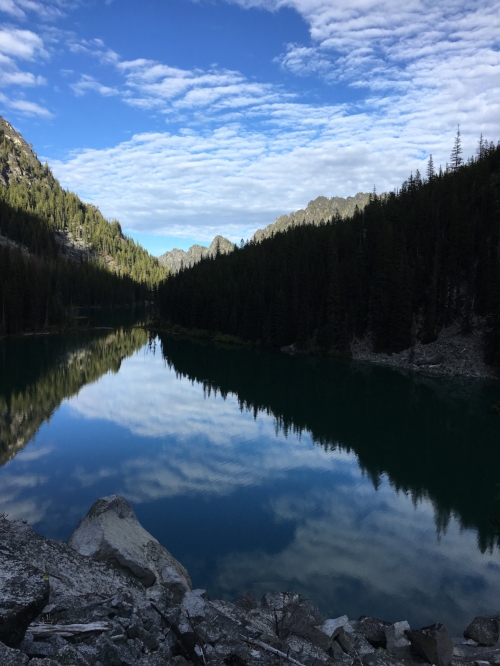 My pace had started to pick up a little after Snow Lake and once we got to the last foot bridge, I felt like I was back to normal. This is how I know it was altitude sickness because once you get back down out of elevation, you condition improves. I felt so good that we ended trail running about 2.5 of the last 4 miles off the mountain. When it was all said and done, I was glad I did the hike. We got to the Snow Lake parking lot at 6:54pm. 15 minutes a head of our planned exit. I’m glad we gave ourselves extra time to get through it because you never know if something might happen that slows you down. The Enchantments were amazing and beautiful, but I now I know that if I want to do it again, I need to go up to elevation and a couple of times first so I don’t run into the same problem. Everyone tells me that you don’t know how you will handle elevation until you get there, well, I learn that I need to train not just for the hiking part of it, but for the elevation too.

Ever think about hiking Rainer or The Enchantments? Want a training plan to get you both physically and mentally ready? Schedule an appointment with Jason to help get yourself ready to not just get up the mountain, but down the mountain too.